Last week I spent a couple of days in the vicinity of Stratford-on-Avon, best known as William Shakespeare’s birthplace.  A couple of photographs from my grand-mother’s collection depict a cottage identified by her daughter, Barbara, as Anne Hathaway’s cottage.  Unusually, Barbara the family shutterbug, wasn’t the photographer as she is in one of the photos holding her camera.  Judging by her youthful appearance, my best estimate of the date the photos were taken is the early 1960s.  It isn’t hard to verify the location, but I stopped by to follow in gran’s footsteps and take my own photo. 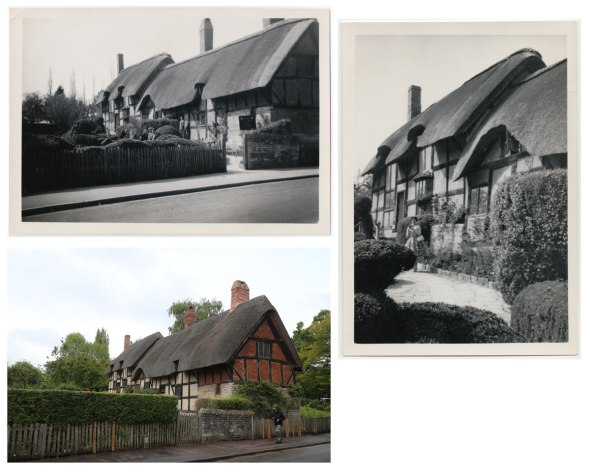 Comparisons between then and now show the entrance sign next to the open gate has been removed, a taller hedge, a lack of visible re-thatching and the middle chimney looks shorter.  The public entrance is now round the back and the gate is kept closed.

The Shakespeare Birthplace Trust manages several properties that are associated with the famous bard, including Anne Hathaway’s cottage and Mary Arden’s farm, the childhood residences of his wife and mother.  Neither woman had any rights to the property now named after her.

According to the Trust’s website Anne Hathaway’s cottage passed from her father to her brother Bartholmew in 1581.  The Trust’s archive includes many digitised documents including the Will of Bartholomew Hathaway of Shottery, dated 6 December 1624.  The image of the will is hard to make out, even if you can read the handwriting, but a transcript helps us out.  The will describes property, including a messuage, the cottage, bequeathed to his son John Hathaway thus:

“all that my messuage or tenement, orchard, garden and backside, with thappertenaunces, seituate, lyeing and being in Shottery aforesaid, togither alsoe with two yard land and a half earable, meddow, comon and pasture, with two closses therunto belonging, seituate, lyeing and beinge within the towne, hamlettes and feildes of Shottery and Old Stratford, with theire and every of theire appurtenaunces”

The will specifies the order of successive inheritance from John:

This is an example of an entailment following the principle of primogenitor.  It is pretty clear that no woman stands to inherit!  The order of succession also tells us the birth order of John’s sons.

The property description of Anne Hathaway’s cottage is fairly typical of the time.  Could you be sure just which messuage or cottage it describes?  Situate, lying or being within the town, hamlet or field of Shottery or Old Stratford is hardly a specified street address.  This will is just one of the documents that records the history of title and other sources of evidence that identify the cottage.

Whilst visiting Mary Arden’s farm in the hamlet of Wilmcote, I met Master Charles, the farm steward enactor.  Stewards were responsible for keeping records, which Master Charles demonstrated by writing the farm account in his book using a quill pen and oak gall ink in secretary hand, a style appropriate to Mary Arden’s lifetime. 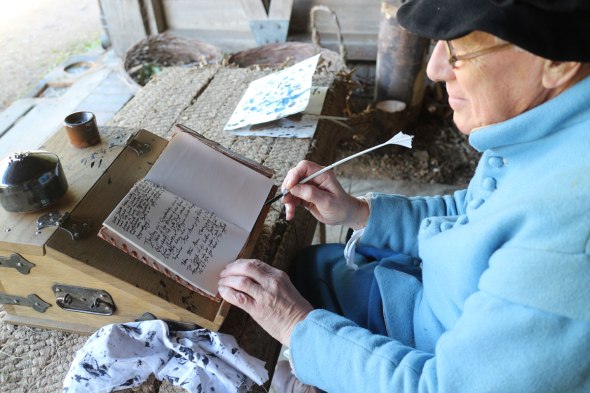 People who can write in secretary hand tend be mines of historical information and Master Charles was no exception.  Identification of Mary Arden’s childhood home is complicated by three factors:

Mary Arden was the youngest of 8 daughters of Robert Arden, who remarried after the death of Mary’s mother.  His second wife, Agnes, was a widow with children from a previous marriage.  When Robert Arden died in 1556 the copyhold of the house passed to his second wife Agnes, the step-mother of Mary Arden.  In 1567, Agnes transferred the house to John Fulwood, the husband of one of Agnes’ daughters.

Copyhold tenure is the lowest tier of feudal land holding, with a hierarchy of rights and obligations.  The copyholder had use of the land from the lord of the manor  in  return for rents or services.  Identifying which manor a property is part of is tricky, especially when we are not sure of the manorial boundaries and how many manors existed.  The hamlet of Wilmcote lies in the parish of Aston Cantlow, but the manor of Aston Cantlow may have had different boundaries.

These are just some of the delicious complexities of English property records that I enjoyed discussing with Master Charles.

Who was your family Snapper or Shutterbug? 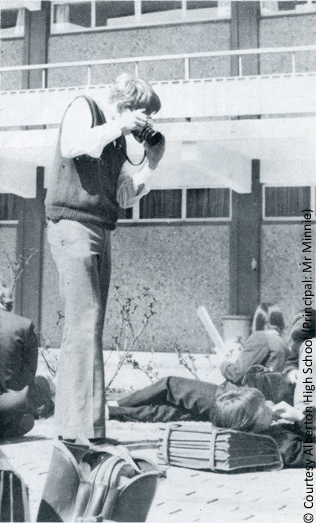 In an age where ubiquitous digital cameras make the popular selfie a snap, we forget how photographic technology influenced the kinds of pictures our forebears took. In this months contribution to Worldwide Genealogy, A Genealogical Collaboration, I use the photo collections in my custody to get to know my family’s snappers and shutterbugs better in Snappers and Shutterbugs – Who Took Your Family Photos?